Reported in the Abandoned vehicles category anonymously at 08:01, Thu 22 December 2016 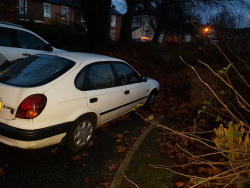 A white car has been left here for several months and dosen't seem to have moved, it's using up one of the few parking spaces we have in the street as people that go to the two nearby pubs often leave their cars outside our houses for the weekend meaning that residents on Bray Street and Tulketh Cresent can't park near their houses. The white car is also parked in the turning point, our car has been bumped and scratched several times in the street as its so busy with cars and theres no clear turning point with obstructions in the way. One less car in the street may ease some of these problems. Also i'm not sure who the car belongs to but until it was abandoned it was a regular in the area.