Reported via iOS in the Rubbish (refuse and recycling) category by Albert Smith at 12:48, Fri 4 November 2016 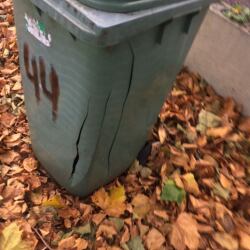 45 gower street has a broken bin. causes refuse to exit from the bin at times. refuse technicians should not provide services to broken bins.