Reported in the Roads/highways category anonymously at 23:49, Sat 8 October 2016 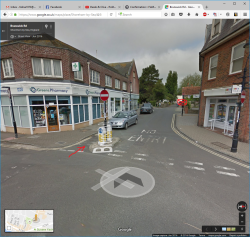 On 'National' Cycle Route 2, at junction of Brunswick Road/Tarmount Lane/St Mary's Road, a contraflow cut-through has been added to the eastern entrance to St Mary's Road, allowing bicycles to enter this one way street. The problem is that there is only a single yellow line directly in front of the cycle-lane entrance, meaning that cars keep parking there and blocking it. (This is even shown on the attached Google Maps streetview!) Suggest extending the double-yellow line on the south side of St Mary's road by a single car length, to allow bikes to actually enter the street without being immediately blocked.

Also, there's a rectangular blue sign on St Mary's Road to warn eastbound vehicles of the contraflow for cyclists, but vandals have roated it 90 degrees to its not visible to approaching vehicles.