Reported via iOS in the Rubbish (refuse and recycling) category anonymously at 14:10, Thu 15 September 2016 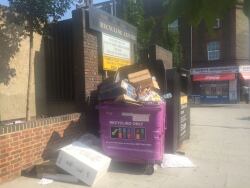 Bins overflowing on the Roman Road.... Refuse collections have been getting worse generally lately over all Tower Hamlets, as shown from all these messages on Fix My Street. Please improve this service!