Reported via iOS in the Flytipping category anonymously at 11:24, Fri 9 September 2016 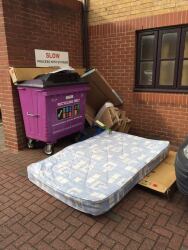 Matress & cardboard next to recycling bins which are always overflowing