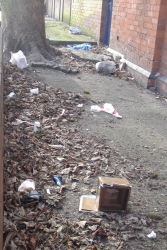 Rubbish is left around the front and sides of 25/27 Lincoln Street... as far as I am aware this building is part of the Council Social Services Department and it is appalling that rubbish is left again and again, to build up in this area. This is at least the third time I have lodged a complaint about this over the last couple of years - yet nothing seems to be done as a matter of course. This time it is just beer cans, carrier bags, an old coat! ... not exactly flytipping but it is building up and as I walk past three or four times a week I know that some of that litter has been there since Christmas. I am angry that a department of the Council can not organise a person just to go outside with a bin liner once a week and that no-one who works there cares enough for the area where they work - it doesn't show much respect for the neighbourhood - and just encourages more anti-social behaviour nearby.