Black BMW has been parked and has not moved for about 6 months. The car is taxed but no MOT but apparently it does not work.

Reported via desktop in the Car parking category anonymously at 10:53, Friday 23 September 2022 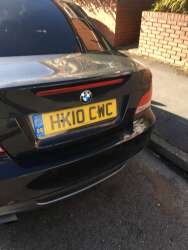 Black BMW registration - HK10 CWC this car has been been 'parked' for about 6 months in the same position outside number 20 Goldsmith Road, Kings Heath.. Have been informed that the car has broken down but the owner cannot afford to have it fixed. Apparently it is taxed but has no MOT. Residents on this road struggle with parking and frequently have to park on adjacent streets. It is very annoying that this car has been left.