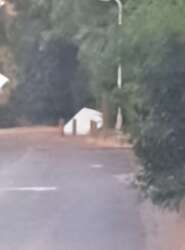 Between 1am and 5.20am a double mattress has appeared. There is a council camera on flats might see people who did it.