Reported via mobile in the Roads/highways category anonymously at 12:52, Saturday 6 August 2022 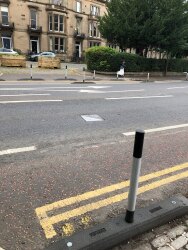 The manhole in the middle of Queensferry Road (North eastbound carriageway) is slowly collapsing. It is making an increasingly loud clacking noise. The cover is clearly bent.