4 weeks on, the bin still on pavement and overflowing

Reported via desktop in the Rubbish (refuse and recycling) category anonymously at 12:17, Monday 18 July 2022 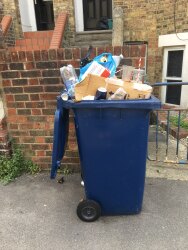 I reported this in early July and you responded that it was Fixed. You may have picked up strewn rubbish, I don't know, but the bin was left on the pavement and so full that it won't shut. Which means passers by dump food/rubbish/anything on it which itself gets got at by squirrels and birds and gets strewn around. I gather you can't go inside the front area of private property to clean up the food waste/black bags/cans on the ground, but at least PLEASE TAKE OFF ENOUGH STUFF TO ALLOW THE BIN TO BE A. CLOSED AND B. COLLECTED BY THE COUNCIL SERVICES ON DUE COURSE. And then push the bin into through the gate. It's an environmental hazard. I've tried ringing the agents who never answer their phone. Thank you.