Reported via desktop in the Pavements/footpaths category anonymously at 18:16, Wednesday 6 July 2022 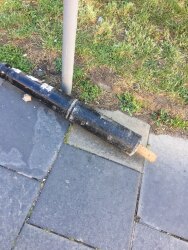 This heany cast iron bollard is at the top of the Pleasance beside the east end of Drummond Street. It is slightly conical so, with luck, if it is set in motion down the street, it will roll in an arc and soon come to rest in the gutter but, rolling down a surface curved in three planes, I would not like to predict how it would behave. I've just seen this as I am infrequently there.