Reported via desktop in the Pavements/footpaths category anonymously at 16:36, Sunday 19 June 2022 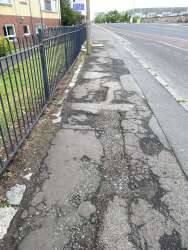 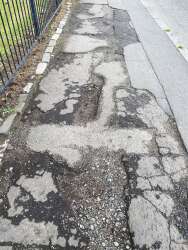 The pavement on Chesser Avenue (west side) between the bridge and New Market Road is disintegrating. It has been patched (badly) several times - before January 2018 when I first reported it but nothing has been done since then - not even an attempt to patch the worst defects. This pavement is used by residents of the Laichpark estate to get to and from ASDA supermarket. It is beyond belief that this very dangerous walking surface has not been repaired five years (!) after it was reported as dangerous. Perhaps it is time for legal action to be taken by local residents (although I have no idea how they, or I, would go about that).