Reported via iOS in the Flytipping category by Sheena Clarke at 18:26, Thursday 26 May 2022 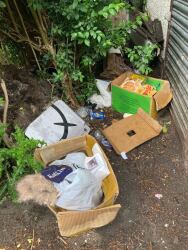 The flytipping previously reported at this location has been cleared but more rubbish has been dumped in the same place. It’s not quite as bad as the previous flytipping.