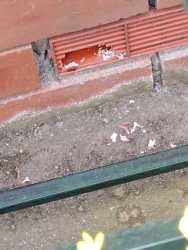 Rats visible on CCTV cameras from shops. Complaints from flats above Savers and also fly tipping from residents at 71-73 Belhouse Rd making it worse