Yet again more rubbish and fly tipping going on at West Street Park near the bottle banks. Maybe clear signage is required to say this is not allowed.

Reported via mobile in the Rubbish (refuse and recycling) category anonymously at 18:35, Wednesday 27 April 2022 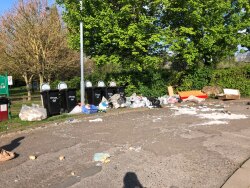