Reported via mobile in the Rubbish (refuse and recycling) category anonymously at 15:09, Tue 1 March 2022 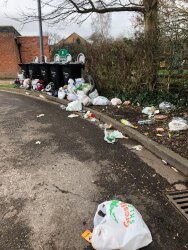 Rubbish is often left here. Bags have been ripped open and waste food, sharp tin cans are disguarded around. This is causing problems for dog walkers as some dogs try to eat what’s there and it’s making them unwell.