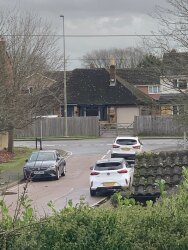 Cars are parked on yellow lines.

They are also parked in a manner which blocks most vehicles from going either up or down.