Reported via desktop in the Roads/highways category anonymously at 19:54, Wed 20 October 2021 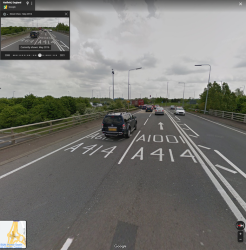 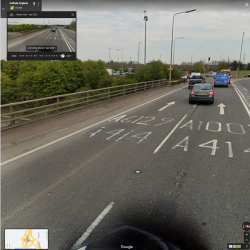 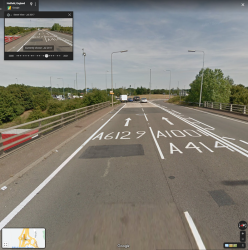 Leaving A1M northbound for A414 ( Hatfield) towards Hertford. on the bridge above A1M. A414 eastbound. left hand lane marking of "A414" was covered over previously, it has faded now so is somewhat readable. further, along this road, the left-hand lane splits into two with markings showing "a6129" in both lanes. the right hand lane splits into two with "A414 A1001" cover both lanes. There are two lanes for A414 coming off of the roundabout. the lack of proper signage and the faded road markings are ambiguous. this has led to myself and many many people I know nearly being in accidents multiple times. The ideal solution would be: >faded marking repainted or recovered >sign(s) stating exactly which lane goes where before the roundabout (there is only a sign with a picture of the roundabout at present) >the roundabout receiving additional line markings to guide drivers in to the correct lane.

This is a very risky and frustrating part of the road. The vast majority of people I know that use this road complaint of this same issue and are concern about the risk of an accident.

Any help with this would be greatly appreciated Regards Bren