Reported via iOS in the Roads/highways category by Denise Paterson at 22:49, Thu 14 October 2021 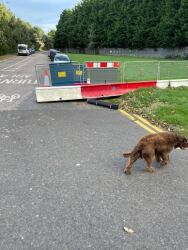 At gypsy brae where the road has been closed to vehicular traffic the barrier has been moved to slow access for vehicles also the bollard Has been broken off. There are now a large numbers of caravans on the field including a semi permenant dwelling