Reported via mobile in the Rubbish (refuse and recycling) category anonymously at 09:10, Thursday 7 October 2021 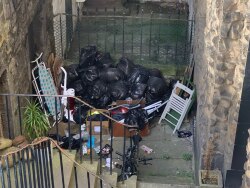 This rubbish has been dumped outside an apartment on Great King Street for at least two months. Birds are opening the bags, more trash is being added it’s a disgrace.