Reported via desktop in the Rubbish (refuse and recycling) category anonymously at 17:12, Sunday 26 September 2021 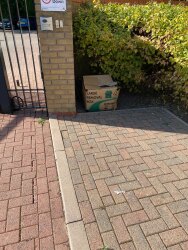 This large box of rubbish has been left outside the gates in Dickens Heath next to 192 Dickens Heath Road😡 People are always disposing of their rubbish here which is totally unacceptable, this needs collecting!