Reported via Android in the Traffic lights category anonymously at 15:51, Tuesday 21 September 2021 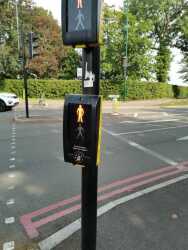 Light is pressed to cross however it switches off. Pressed 3 times until it eventually stayed pressed. Crossing does not allow to cross 2 times so could do with a longer time frame for school children and buggiee