Reported via desktop in the Car parking category anonymously at 15:28, Sunday 19 September 2021 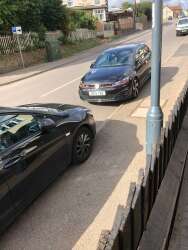 Number 53 coventry road and now several others have followed suit in parking on the pavement, in some cases blocking it, forcing pedestrians out into the road. this also has the effect of forcing those coming out of the culdesac between 55 and 53 into the dangerous situation of not being able to see if it is safe to pull out. getting sick of the near misses as drivers on this busy road are forced into one way traffic due to these chicanes being formed. double yellow lines would help, as would a traffic warden once in a while.... before someone gets hurt!