Reported via mobile in the Rubbish (refuse and recycling) category anonymously at 09:46, Wed 8 September 2021 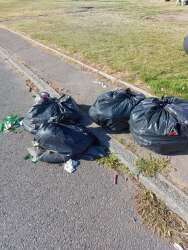 It's been there for 2 weeks, bin men arnt collecting. Very heavy and glass everywhere.