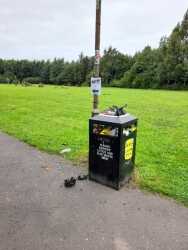 Overflowing bin on path between S Gyle Station and Gyle centre. Another bin at centre end of path is the same, yet the one near the station is empty. Go figure. Bins need emptied far more often. This is a constant problem.