Reported via iOS in the Rubbish (refuse and recycling) category anonymously at 12:50, Sun 22 August 2021 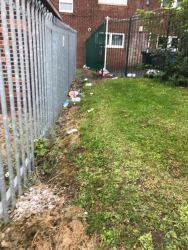 Next to the fence which runs from the back of the flats next to the woods towards Whiteways Drive just after its junction with Margate Drive.