Reported via desktop in the Rubbish (refuse and recycling) category anonymously at 14:03, Wednesday 28 July 2021 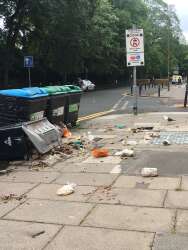 Rubbish all over street. There are maggots and lots of seagulls. The smell is horrific and filling the stairwell of no.18. The bin has been overflowing for about 1 week and was pushed over on Tuesday morning.