Reported via desktop in the Gully or manhole defect category by Paul Mundy at 12:39, Wednesday 28 July 2021 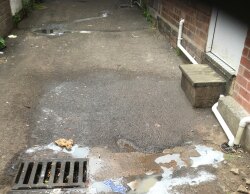