Reported via mobile in the Car parking category anonymously at 21:50, Wednesday 23 June 2021 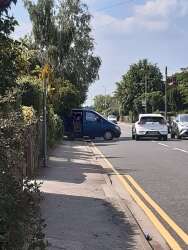 This idiot decided to do some work at the address he is standing at. I think there were two people from the same company as there was a company van behind it who was also parked across the path. Pedestrians had to cross over the road to the other side of the road then cross back over again. It is also blocking part of the road aswell as the van is going across the road. The roads are big enough for cars . They don't need to be taking up our paths aswell.