Reported via Android in the Rubbish (refuse and recycling) category by Kelly Forbes at 19:30, Thursday 10 June 2021 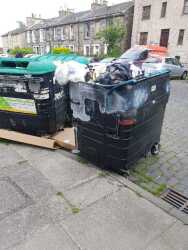 The bin lid for the communal paper bin at 75 Pitt St was melted in a bin fire several weeks ago. Bin is being treated as a rubbish bin and attracts gulls because it's exposed.