Reported via mobile in the Rubbish (refuse and recycling) category anonymously at 08:27, Wed 9 June 2021 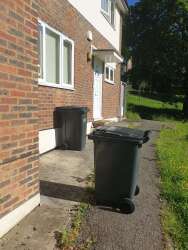 The near bin at no 81 has not been collected for 12 weeks even though the one at 83 has (the far bin pictured). The council has been contacted but the response has been to claim that the bin has not been correctly positioned. The bin has been in the position shown the whole time.