Reported via iOS in the Rubbish (refuse and recycling) category anonymously at 20:43, Tuesday 8 June 2021 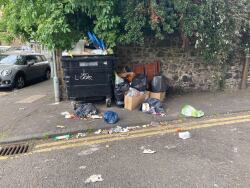 As per photo,yet again this is a disgrace, not helped by the seagulls pulling bags out of the overflowing bin and the food waste ends up all over the street. This bin could literally be emptied daily since it was placed there during the disruption of the tramworks.