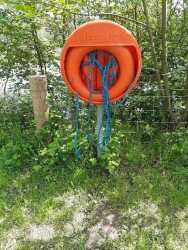 This life buoy was reported a few weeks ago for being in a dangerous condition. In its current condition it may not be possible to use it for its primary function of lifesaving. Alternatively, it could be damaged further by irresponsible persons or small children could become dangerously entangled in the ropes.