Incorrectly presented rubbish at foot of stairs to flats above

Reported via desktop in the Rubbish (refuse and recycling) category by David Clover at 17:41, Thursday 15 April 2021 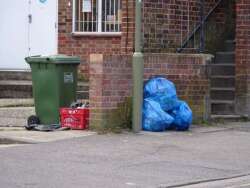 As before, residents have presented the wrong rubbish for collection on Tuesday this week and it remains in the street and uncollected.