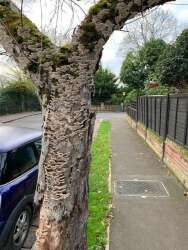 There is a dead tree that has been reported a number of times on Boston Gardens, it now creeks when the wind blows. This is an accident waiting to happen, what does it need to take to get something done before it falls onto a vehicle or worse a pedestrian. I actually spoke to a council worker last year on the phone who said it will be dealt with, now a year later still no action, very dangerous.