Reported via Android in the Flytipping category by Nicola Owen at 14:43, Friday 5 March 2021 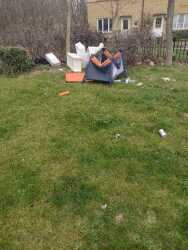 A lot of what looks like bedroom storage, including a baby pen, and some general waste dumped in bushes on communal land.