Reported via Android in the Rubbish (refuse and recycling) category anonymously at 14:00, Tuesday 23 February 2021 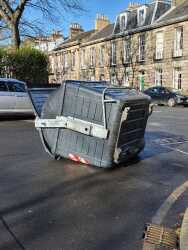 As you can see from the photo the large communal bin on the corner of Saxe Coburg Street and Saxe Coburg Terrace has blown over. Please can this be fixed as it's fallen on to the road and is a bit of an obstruction and danger.

In addition the lever to open the bin doesn't work very well these days. The lid barely open when I press the foot lever. I don't know if that can be fixed at some point?