Reported via mobile in the Rubbish (refuse and recycling) category anonymously at 15:24, Sun 7 February 2021 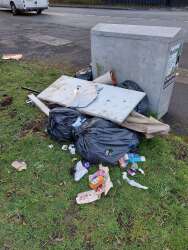 5 Household rubbish bins (with food waste), a garden umbrella, a old canvas and other bits. Its at the end of Sheddington Road going onto Jerry's Lane. Opposite number 200 Jerry's lane.