Bin outside dress stop is completely broken, lid is falling off. 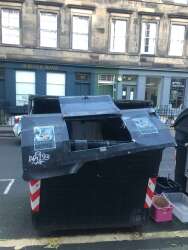 The lid of the large street bin is completely falling off, it looks terrible and is a hazard. It is moments from snapping off. It has been graffitied also. There is a terrible problem with fly tipping by these bins. As you can see, there are things outside it in the image above. This is a daily occurrence and myself and others on the street have had to repeatedly report mattresses, sofas, and bathtubs being dumped outside the front of our homes. It is disgusting and not on, the bin needs to be fixed and a sign needs to be placed there about fly-tipping.