Bin has been pushed over by the bus stop

Reported via mobile in the Rubbish (refuse and recycling) category anonymously at 13:19, Sun 10 January 2021 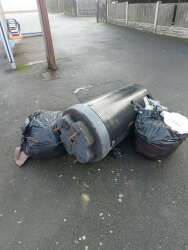 The bin has been pushed over again. Its outside number 277 Witton Lodge Road near Sheddington Road. Rubbish bins also next to the bin.