Reported via mobile in the Rubbish (refuse and recycling) category anonymously at 13:01, Saturday 9 January 2021 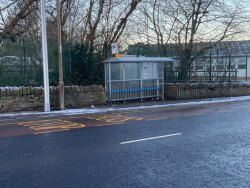 Gilmerton Road outside St John Vianney’s Bin disappeared some weeks ago and never replaced. One of three to be removed from the area - 2 outside school at St John Vianney’s - and one next bus stop up opposite Liberton Northfield Church. Where there were 4, there is now 1. When there are news reports of rat population in Edinburgh up 25% caused by lockdowns, vacant commercial property, and poor waste management. https://www.edinburghnews.scotsman.com/ health/ edinburgh-locals-warned-christmas-scraps-cause-rat-population-surge-3079811 This is unacceptable. We are fighting coronavirus. Don’t want diseases spread by rats as well.