Reported via Android in the Pavements/footpaths category anonymously at 20:31, Saturday 2 January 2021 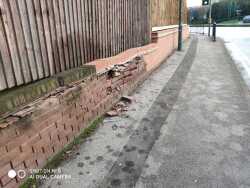 Locals who walk into Solihull town center are concerned at the speed of traffic coming round the Blossomfield roundabout. A vehicle has recently smashed into this wall, and had there been anybody walking, a serious incident would have occurred. The island needs a barrier around the entire island perimiter to protect people walking on the pavements or somebody will get killed..