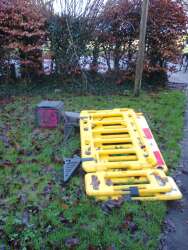 The cycle counter at this location (just inside the park, next to the path), was vandalised many, many months ago, if not a year ago. Rather than being repaired, temporary fencing was erected around it (which collapsed long ago), and it's just been abandoned. It has since been further vandalised. Please repair.