Reported via desktop in the Flytipping category anonymously at 14:53, Thu 10 December 2020 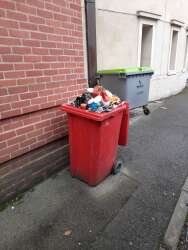 The red waste wheelie bin appeared on the pavement more than three weeks ago next to the Sackler Library wall. All University departments in the area were approached- unfortunately the owner of the bin is unknown. The content of the bin over-spills on the pavement attracting rodents.