Black wheelie bins were not collected on 3rd nov

Reported via mobile in the Rubbish (refuse and recycling) category anonymously at 10:31, Wed 4 November 2020 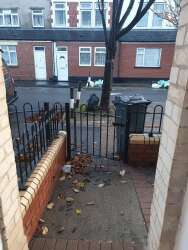 Black wheelie waste bin was not collected on the 3rd november. Not the first time it has happened. Outside 32 wells street. Video of the bin men openly ignoring the bin. Complained to council but yet to receive an adequate response since it seems they interpret it as bin bags not wheely bins. That's even when ive said it's an issue with an uncollected black wheely bin