Reported via iOS in the Miscellaneous category anonymously at 19:50, Wed 28 October 2020 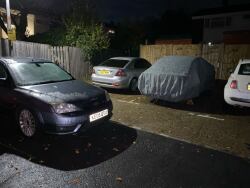 A resident in the flats near to this location appears to be using the public car park to break down a vehicle for scraps or parts. Unable to get VRM as vehicle has now been covered and plates removed. Vehicle is not abandoned but is not off the road and SORN as should be. Other vehicles used by the person are the other two Ford’s in the picture. Vehicle is unsightly and taking up space for legitimate users of the car park. Vehicle currently outside 394 Archer Road.