Reported via desktop in the Roads/highways category anonymously at 21:45, Sat 17 October 2020

Sent to Southwark Borough Council less than a minute later 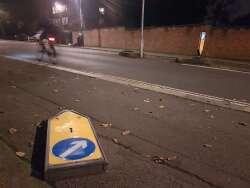