Several bags of waste dumped on side of road.

Reported via desktop in the Flytipping category anonymously at 16:43, Friday 16 October 2020 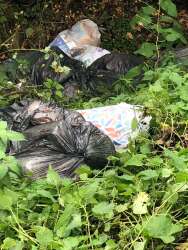 There are several bags of rubbish dumped on the side of the road. Residents have looked into the first bag to find medical waste, what appear to be used packs of injectable drugs, used rubber gloves and bloody swabs. The other bags remain unopened except for one which seems to have been opened by an animal, perhaps a fox or rat. Ashford Lane, on the Stratford side of the canal appears to be being targeted by fly tippers.