Reported via iOS in the Flytipping category anonymously at 21:56, Monday 28 September 2020 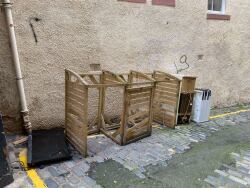 Washing machine, fridge and television discarded in Lady Wynd at side of 52 Canoes Tiki Den. Also, bar has closed and has left behind the remnants of their flimsy bin store that they erected because they didn’t want their bins inside the property. It attracts more waste. Please be careful when picking up items, they have been dumped on top of human excrement. Also, because the bar is abandoned, the wall at the front on West Port has crumbled significantly on the pavement.