Reported via iOS in the Pavements/footpaths category by James Snell at 14:10, Friday 18 September 2020 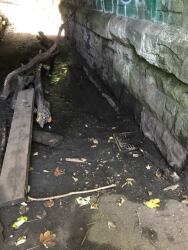 Path that goes through tunnel gets flooded. Some users have placed boards and large branches in the tunnel to help. These now obstruct the tunnel and they are slippery when wet. The drain at the lower right side of the tunnel in the picture is probably blocked.